My research projects span a variety of fields.

Below I have highlighted some of my ongoing research below:

Since 2010, I have been very involved in the both OER and Open Education initiatives. I have worked hard to utilize digital technologies creatively in my on- and off-line classrooms in order to cut down student textbook and material costs. To do so, I have developed, reused, and modified OERs as well as made numerous presentations across SUNY campuses/Open SUNY about effective ways to implement OERs in college assignments and courses. Based on my work in this area, I was honored with the following opportunities and accolades:

Between 2012-2014, I was invited to join Dr. Nan Travers and Amy McQuiggie’s PLA/Lumina Grant as an Academic Team member. For the next two academic years, we worked together, with an panel of PLA experts, to develop the Global Learning Qualification Framework.

In addition to the highly successful Buffalo Project (see affiliated web page for details), I have also co-created other projects specifically related to Indigenous cultures of the Americas and beyond.

I have highlighted a few below:

In 2018, I have partnered with the SUNY Empire President’s Office, the Diversity Equity and Inclusion (DEI) Council, WNY scholars, as well as  Eastern native tribes and nations, to create short oral history videos and OERs that highlighted important aspects of native culture.

This innovative OER-based course was developed to commemorate the 140th anniversary of the Battle of Little Bighorn and the return of a battle dress to the battlefield. SUNY Empire staff was on hand during this commemorative event, videotaping events, council meetings, and oral history for students. 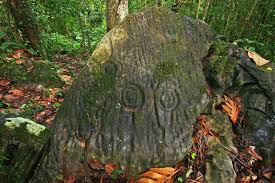 In 2015, I began an archaeological project on Puerto Rico, focused on the analysis of pre-Taino/Taino petroglyphs at the previously undocumented site of La Mina. My team, James Schuetz, P.G. and Rex Caudwell, and I published an article on this research in Spring 2017 (Click here).

Beginning in the Summer of 2012, I began a comprehensive Spain Book Research and OER Project which was twofold:

Caption: This is a photo of Toledo, a Medieval city 1 hour outside of Spain’s capital, Madrid. (Photo taken by author, 2012)

In regards to the Spanish Book Research component of the project, I am working on a book project tentatively titled The Transformation and Resilience of Aztec Female Roles, 1200-1700.

I have also worked in other sites across the Yucatán peninsula and Greater Mesoamerica, conducting both historical and archaeological research. I was part of a four person team that surveyed the central Yucatán state and documented previously unreported Maya sites and structures in 2005. Additionally, in 2006, I oversaw the mapping of Maya structures along a 2km transect at the Classic period site of Chunchucmil; this transect survey was part of the Pakbeh Regional Economy Program, a 10-year archaeological project directed by the late Dr. Bruce Dahlin (1996-2006).

CAPTION: In this photo, I was working with local Maya elders and youth conducting a Phase I project concentrating on the mapping of Classic period Maya structures in the site of Chunchucmil (Photo taken in 2006, Chunchucmil, Yucatan, Mexico).

Since 2009, I have concentrated my recent Mesoamerican archaeological and ethnographic studies on the Maya occupying the Northern Maya Lowlands, specifically the Yucatan capital, Mérida.

Caption: I was in front of only remaining section of the Ciudadela Complex in Mérida , Yucatán , Mexico, 2015.

More specifically, my research has focused primarily on the Ciudadela site within the city of Tíhoo, located underneath what is today the modern Yucatán capital city Mérida.

CAPTION: In this photo, I was invited to attend a local elementary school graduation in the modern Maya community of Chunchucmil. Statistically, many Maya people do not have the opportunity to complete formal education. As such, graduations at all levels are viewed as very important events within the Maya community. (Photo taken in 2006, Chunchucmil, Yucatan, Mexico).

I have also conducted extensive historical research on both the Aztecs and Maya.  My interest in both cultures have taken me to a number of highly respected institutions to conduct research, including funded trips to the University of Texas-Austin-Benson Latin American Library, the University of Florida-Florida Museum of Natural History, the Universidad Nacional Autónoma de México (UNAM, National University of Mexico) in Mexico City, the Archivo General de la Nación (AGN, General Archive of the Nation) in Mexico City, and to the Instituto Nacional de Antropología e Historia (INAH, National Institute of Anthropology and History) Regional Archive in Telchaquillo/Mayapan, Yucatán.

CAPTION: I am also very interested in colonial Mexican history and its associated writings. I often spend time translating Spanish documents and collecting representative images that show the acculturation of native beliefs into Spanish culture and practice. The above scan is a representation of this theme in that it combines both Aztec traditions and Spanish beliefs. (Scan taken by author in 2005, University of Texas at Austin-Benson Latin American Collection-Special Collections, Austin, Texas)

CAPTION: In this photo, I was helping to map the possible site of Fort Shackleford, built in 1855 during the Third Seminole War, 2008.

In the Southeastern United States, my research has focused on the Seminole peoples and their ancestral antecedants (e.g. Creeks, Calusa, Apalachee, Choctaw, Tequesta, and Timuca). While in graduate school, I had the opportunity to work closely with the Seminole Tribe of Florida and Dr. Harry Kersey, a leading expert on Seminole and Miccosukee history.  I spent 5 months working as a Public History Intern at the Ah-Tah-Thi-Ki Museum, located on the Seminole Big Cypress Reservation. While there, I spent 2 months collecting ethnographic data on Seminole history and culture. Additionally, I volunteered on a number of archaeological digs and surveys conducted by the Tribe along the southeastern tip of Florida. Based on my interest in Southeastern Indian history, I also analyzed a number of museum and archaeological field collections excavated from sites across Florida, Georgia, Alabama, and Louisana, including those held at Florida Atlantic University, the Graves Museum/Ft. Lauderdale Historical Society, the Ah-Tah-Thi-Ki Museum, and at the Seminole Tribe of Florida-Tribal Archaeology Lab. In 2018, I published a few articles about my work with the Seminoles (see CV and homepage.)

CAPTION: In this photo, I was organizing precolumbian and colonial ceramics by type in order to determine the occupants of this site. (Photo taken by author in 2009, University of Florida-Florida Museum of Natural History-J.C. Dickinson Hall Research Center, Gainesville, Florida)

In 2007-2008, I took a break from academia and went to work for the Seminole Tribe of Florida-Tribal Historic Preservation Office (STOF-THPO), a federal agency overseen by the Seminoles, where I directed over 150 archaeological projects conducted on Seminole reservations and fee lands. While working at the STOF-THPO, I also reviewed archaeological projects for archaeological compliance issues and federal regulatory standards (e.g. NHPA-Section 106, ARPA, NEPA, and NAGPRA). One of my most prized experiences while working for the Tribe was the opportunity I had to participate peripherally in Tribal politics as a representative of the STOF-THPO at the United South and Eastern Tribes, Inc. meetings with the U.S. federal government in Washington, D.C. and Louisiana.